Prescription help for thousands of Oregonians may be coming soon after an all-night session of the U.S. Senate and consideration of a novel-length piece of legislation.

U.S. Sen. Ron Wyden, D-Oregon, bleary-eyed after the marathon session in Washington, D.C., briefed Oregon reporters Monday on the impacts of the Inflation Reduction Act of 2022.

The package included the country’s “biggest investment ever in climate change” that included his long-proposed Clean Energy for America proposal, Wyden said. As chair of the Senate Finance Committee, Wyden was deeply involved in work on the legislation passed on Sunday, Aug. 7, on a party-line vote. It now goes to the U.S. House.

Wyden said it had been a “grueling few months.”

He said the package includes money to help Oregon farmers and ranchers and to help mitigate the impacts of drought.

It also deals with prescription drugs ­– an issue he’s been working on since his days in Oregon in the late 1970s working as co-director of the Oregon chapter of the Gray Panthers. He recounted days then of seniors taking their pill bottles to testify at hearings at the Oregon Legislature, seeking help with drug costs.

One feature will limit out-of-pocket prescription spending for seniors to no more than $2,000 a year. In Oregon, Wyden said, that provision will cut costs for 20,000 Oregonians.

He said the legislation extends federal health care insurance for 136,000 Oregonians, saving them an average of $82 a month.

And he said pharmaceutical companies now will have to pay a federal penalty if they raise the prices on drugs more than the rate of inflation. That provision takes hold in October if the House passed the act, as expected since Democrats control that chamber.

The legislation also sets the stage to allow the federal Medicare system to negotiate prices for prescription drugs. That effort starts in 2026 with 10 of what Wyden said are the most costly drugs for treating cancer, arthritis and more.

“No longer will drug companies be able to string Medicare along for years or even decades while taxpayers foot the bill,” Wyden said in a written statement. “This policy targets the most expensive, most used drugs that have had zero competition for years.”

Wyden pushed back on assertions from the pharmacy industry that controlling drug costs would stifle the invention of new drugs. He said the legislation directs federal officials to ensure pricing doesn’t hamper drug innovation.

“Big Pharma is going to fight this every step of the way,” Wyden warned.

Wyden said that with prescription reform and climate change legislation on its way, he’s turning his attention to two other issues ­– profiteering by major oil companies and the nation’s mental health challenges. 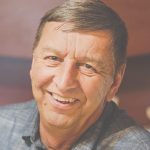