A couple sits outside of Ritter’s Housemade Foods during the first phase of Salem’s reopening on Friday, May 22. (Amanda Loman/Salem Reporter)

One Salem street may resemble something closer to a European café Saturday when the city launches a pilot program intended to expand restaurants’ capacity as COVID-19 restrictions require tables to be spaced six feet apart. 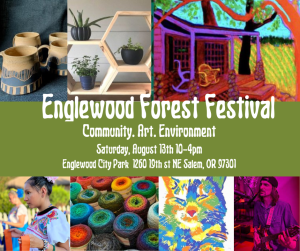 The south side of State Street between Southeast Liberty Street and Commercial Street, where Taproot and Wild Pear are located, will be closed to traffic and parking for one week starting June 20.

Wild Pear’s general manager Meghan Walz said adding another five tables outside will allow the business to get closer to its previous full capacity.

Right now, the eatery only has 10 tables open inside, she said.

Next door, Taproot Café and Lounge is more than doubling its capacity by adding an additional 15 tables outside.

Cars can still drive on the north side of the one-way street to allow for alley and emergency vehicle access.

On that side of the street, W Wallace is planning to add additional tables outside on the sidewalk instead of in the street where parking is still allowed.

Manager Naomi Kersey-Bronec said she’s not sure how many tables they’ll be able to add.

It’s a pilot program the city is hoping to be able to extend to other areas of downtown.

Jim Vu, chair of the promotions committee and founding board member of the Salem Main Street Association, first brought the idea to city councilor Cara Kaser, who represents the downtown ward, three weeks ago.

Vu asked different businesses if they would support of expanding dining into the street and he said he got close to unanimous answers of “Yes, this would be awesome.” He said a vocal minority was concerned about traffic.

“The bigger picture is giving restaurants, retail establishments, and businesses downtown a chance to survive,” he said.

Next weekend, on June 27, sections of Court Street will be closed so other restaurants can offer outdoor dining.

Vu said it will likely be the portion between High Street and Commercial Street, where the Governor’s Cup Coffee Roasters and Venti’s Café are located. He’s also working out the logistics of closing a portion of High Street between State Street and Ferry Street.

He said his group is looking at installing planter boxes near barricades to beautify the space.

“We’re not just setting it up to look like a war zone,” Vu said.

Vu recommends shoppers park in a parkade as the closures eliminate spaces, because every business is less than three blocks away from one, the equivalent of walking across the Costco parking lot.

If the program is successful, the closures may be extended until September, the city announced this week.

Have a tip or story idea? Contact reporter Saphara Harrell at 503-549-6250, [email protected] or @daisysaphara.