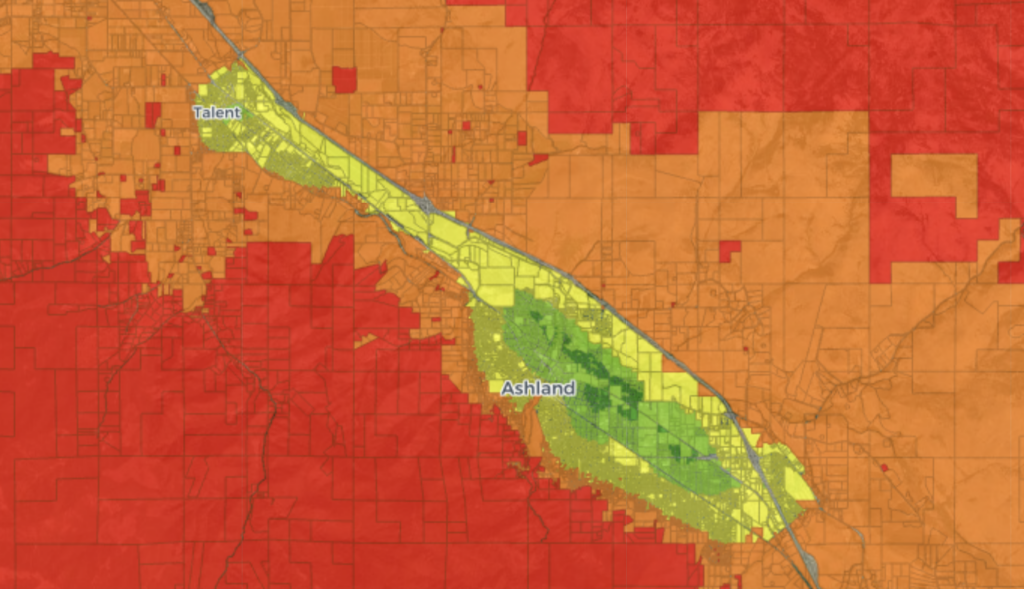 Juliet Grable and her husband bought their house near Ashland in 2014. The property is surrounded by trees, and the two were familiar with southern Oregon’s dry summers, so they were aware that they’d be subject to wildfire risks.

“Anyone who’s lived here for any amount of time and is paying attention knows,” she said. Still, after reviewing a new map from the Oregon Department of Forestry and the U.S. Forest Service that showed their house is in an extreme wildfire risk zone, Grable said they’ve had moments of regret about the purchase.

“Knowing what we know now, I’m not sure we would have done that,” she said. “I wasn’t aware how high the risk really was.”

Grable is one of about 80,000 property owners who learned on June 30 that they live in an extreme wildfire zone, according to the new Oregon Wildfire Risk Explorer.

The searchable map shows the wildfire risk of properties across the state. Anyone can plug in their address and see where their property falls on a risk spectrum. The map was made by a collaborative that included the state’s Department of Forestry, the U.S. Forest Service and Oregon State University as part of Senate Bill 762. That bill, passed during the 2021 Legislative session, ordered state agencies to undertake a slate of proactive measures to prevent and respond to the growing threat of wildfires.

Doug Grafe, Gov. Kate Brown’s wildfire programs director, said in a press conference Tuesday that many have asked questions about how the map will impact their insurance rates and property values since it was released. And some cities that have their own risk maps have asked to have them grandfathered into the database: They say their own assessments and building standards are superior to those the state might mandate.

About 120,000 of the state’s nearly 2 million tax lots are in what’s called the wildland-urban interface – an area where wild vegetation transitions into areas with more human activity – and in high or extreme risk zones.

About 80,000 of those lots likely will be subject to new state building and vegetation management standards. Much of the deep red areas of the map where there are extreme wildfire risks are in the southern, central and eastern parts of the state.

The State Fire Marshal’s Office will set the new landscape management standards that will affect people living in areas of high and extreme risk. Alison Green, the office’s public affairs director, said at the news conference that the standards will come out this winter and be effective next spring. Building code standards will be set by the Oregon Building Codes Division and will also go into effect next spring.

“But we would really encourage property owners to do everything they can now to prepare,” she said. “There are still things folks can do to prepare their property and really make the difference when wildfire season is at our door.”

Green said the agency has $25 million to offer for risk-reduction grants. The office will accept a first round of applications in September and a second early next year.

“We will have some grant programs for local governments and for property owners,” Green said. “We do have folks that can come out and take a walk with them and give them tailored recommendations for their properties.”

Much of the work Grable and her husband have done on their property to mitigate fire risks has been paid for with “sweat equity,” she said.

They’ve dismantled and tossed their wooden deck, removed dead and dying trees, removed lower limbs from the trees around their house and made sure pine needles are swept and raked far from the house and off their metal roof. They’d like to replace their wood siding with a fiber cement that’s more fire resilient, but it’s an expensive upgrade they’re still considering.

Many of their neighbors have done the same.

“It doesn’t really matter if you treat your property if you’re surrounded by untreated properties,” Grable said.

Among other costs Grable and others worry about is insurance rates.

Grafe, the wildfire programs director, said he does not expect rates to go up for people like the Grables that have made their home and property safer.

“First of all, the Oregon insurance market is currently very robust,” he said, adding that many of the more than 150 insurers in the state have done their own wildfire risk assessments.

The Fair Insurance Program, available for people who cannot get insurance because of wildfire and other risks, has not had a big uptick in demand, according to Grafe.

He said being transparent about risks and proactive about wildfire resilience should help stabilize any volatility in rates from more wildfires.

“We really want to leverage this with the insurance market,” he said. “Or at least offset increases in pressure on that system, given the mitigation that we’re doing in Oregon.”

Those who wish to challenge the wildfire risk assigned to their property can submit an appeals form at the Oregon Department of Forestry’s website.

Some cities have their own assessments

Chris Chambers is the wildfire division chief with Ashland Fire & Rescue. In 2018, he initiated a wildfire risk assessment of properties in the city and within a mile buffer zone outside of it.

His office collected more than 6,000 data points, applying risk factors to every land parcel in the city. Since 2018, all new construction in Ashland has had to meet fire-resilient vegetation management and building standards based on those risks.

Chambers is concerned that the state map, which he said is not as comprehensive as Ashland’s, could get in the way of the fire resiliency work the city has been trying to do for the last four years.

“When you’re mapping at state level you can’t afford to be very site specific. The data we’ve collected is better than what the state had available when they commissioned this map,” he said.

Chambers said the state map doesn’t include the same comprehensive vegetation data his office collected, and didn’t consider the potential for flames to spread across the city. “Were surrounded by vegetation in parks and riparian areas within the city limits,” Chamber said. “They wrote off the impact of flame length in an urban area. When we saw downtown Talent, downtown Phoenix burn down, no one in their wildest dreams thought that would happen,” he said, referring to the 2020 Almeda Fire that hit the two southern Oregon towns.

The state’s wildfire risk map shows downtown Ashland as an island of green in an otherwise sea of high-risk orange and red.

“A decent proportion is considered no risk, which I know is flat out wrong, or low risk which, I think is also wrong,” Chambers said. “Other areas out of town, I agree, are extreme.”

Chambers is advocating that any city with a wildfire risk map, such as Ashland’s or neighboring Medford’s, be grandfathered into the state’s forthcoming codes. “We shouldn’t lose the ability to apply our codes,” he said.

But Chambers sees the map as a good starting point for city and county leaders who haven’t taken a hard look at their wildfire risks.

“We should expect more in the future, especially with climate change in cities in Oregon not used to seeing a lot of wildfire, and now in drying areas of the state,” he said.

CORRECTION: This story originally stated that the State Fire Marshal’s Office would update building code standards. Those standards will be updated by the Oregon Building Codes Division.