The need for food assistance is at a near-record high in Oregon, and food bank managers are sounding the alarms about rising hunger across the state.

Local and regional food managers said they see no signs of the demand abating in the coming months, and at least one said the food pantry she manages has been forced to shrink the amount of food they provide because of rising prices and soaring demand.

“We would need donations to increase in kind with the demand,” said Ranae Staley, executive director of The Giving Plate in Central Oregon, which began offering 19 pounds of food to each client twice monthly at the start of November, down from 30 pounds per person during 2021. “We have to adjust somewhere in order to not be in a place where we have to turn people away.”

If food banks are a barometer of the financial stress in a community, the pressure now reads almost as high as it did during the first year of the pandemic, when COVID-related closures led to massive layoffs and tanked the national economy.

Susannah Morgan, CEO of the Oregon Food Bank, the state’s primary hunger relief organization, estimates 1.5 million people will have visited the state’s food banks and pantries by the end of the year. That total is only slightly lower than the 1.7 million people who visited in 2020.

“It just exploded during the pandemic,” said Morgan, who has been fighting hunger for 26 years. “I have no data that makes me think we have ever cracked a million before.”

By mid-2022, many of those programs had ended, even as prices for all kinds of goods shot up. More families again turned to food banks to ensure they could put food on the table.

At the Keizer Community Food Bank earlier this month, more than 70 vehicles came through the line during the morning food distribution — the most, volunteers said, that they had ever seen.

Marisol Montes’ green sedan was one of them. It was her first time visiting the site, after two weeks of unemployment stretched her family’s finances tight.

Seeing how many people had joined her to pick up food that day was “an eye-opener” as to how common her situation was.

Farther up in the line, Sandy, who declined to give her last name, said a combination of her mother moving in with her and her husband and inflation had overwhelmed their fixed-income household.

“We knew retirement was going to be tight,” she said. “We just didn’t think it would be this tight.”

Stubborn inflation has had a twofold effect on the food bank system this year.

Rising demand has forced many food banks to buy more provisions. And while wholesale prices are generally more stable than what a shopper sees at the grocery store, the nonprofits’ dollars don’t go as far as they used to either.

The Oregon Food Bank, for example, spent about $600,000 on food prior to the pandemic, said Morgan, the food bank’s CEO. This year, that number has jumped to $10 million.

Though an influx of state and federal emergency funds made that level of spending possible, “it’s completely unsustainable” in the long term, Morgan said.

Reducing the number of people relying on the food bank system is the key to bringing down those purchases, she said. The Oregon Food Bank also works to establish relationships with local farmers and increase donations, but at some point, she said, “There’s no more juice in that lemon.”

Her organization buys and warehouses much of the food that makes its way through regional distribution centers and into the food pantries like the Keizer Community Food Bank.

Additionally, the local operations buy some of their own food wholesale while also looking to community donations to fully stock their shelves.

Staley said The Giving Plate, which is the largest food pantry serving Central Oregon, gets anywhere from 20% to 30% of its food from the Oregon Food Bank. About 25% of its revenue comes from foundation grants. The rest, she said, comes from community donations of both food and money.

The Giving Plate saw a 60% increase in visitors to its pantry this year over last. While local donations have gone up during the pandemic, Staley said, they haven’t kept pace with the demand.

Staley’s uncertainty about whether demand will subside in the coming months led to her decision to reduce the pounds of food distributed throughout 2022, she said. The reduction in weight means that each person is now receiving about 15 days worth of meals, rather than 24, she said. Each client can visit the pantry twice a month.

Staley said the regional distribution site where the pantry gets food from the Oregon Food Bank doesn’t always have enough of the items The Giving Plate needs. The renovation of The Giving Plate’s facility in Bend has also limited its ability to warehouse food.

In 2020 and 2021, state and federal leaders’ actions were driven by a sense of emergency wrought by the pandemic.

The Oregon Food Bank’s record spending on food this year was largely made possible by the Oregon Legislature’s allocation of $26 million to the organization over two years to assist with food purchases and the costs of warehousing and distributing food to other pantries. That total includes $12 million in American Rescue Plan funds.

The organization also received $800,000 in federal funding to manage a program called the Commodity Supplemental Food Program, which provides meal boxes to residents ages 60 and up in 12 Oregon counties.

The Oregon Department of Human Services received $20 million in federal funding to fuel the Emergency Food Assistance Program, which serves individuals and families with income at or below 300% federal poverty level through food pantries, food banks and congregate meal sites. The Oregon Food Bank also runs that program.

“The state of Oregon (has) been a huge supporter and has been providing us with funds to be able to purchase at rates we’ve never been able to afford before,” Morgan said.

Some bolstered federal assistance is ongoing. The federal government increased benefits of the Supplemental Nutrition Assistance Program by about 45% since 2020, said Jake Sunderland, a spokesperson for Oregon DHS. Some benefits will be cut, though, when federal and state public health emergencies expire, according to the Center on Budget and Policy Priorities in Washington, D.C.

Other measures that helped households stay stable enough to avoid needing food assistance have already expired. The expanded child tax credit, for example, hailed by the Biden administration as a key factor in reducing child poverty in 2021, ended in 2022. Universal school meals ended after the 2021-2022 school year, and only California and Maine decided to fund them statewide on an ongoing basis.

Without ongoing measures to reduce demand for food assistance, food bank managers described a great deal of uncertainty about the future.

“You can think of the food bank system as kind of the last resort for families facing hunger, so you would think that the long-term solution to hunger is several systemic changes,” said Rick Gaupo, executive director of the Marion-Polk Food Share, the regional food bank that sends food to sites like the Keizer Community Food Bank.

In Oregon, Morgan said her organization and the Partners for a Hunger-Free Oregon are crafting legislation to be introduced in the next session that would create a state-run program that would run adjacent to SNAP, but would be available to some people who aren’t eligible for the federal program, such as recipients of the Deferred Action for Childhood Arrivals program.

The Legislature will pass a new budget in 2023. Morgan said the longer session will give more time to work out the details of their proposed bill, including analyzing the cost.

“A complicated bill for a program like this will require some work to build up the political support,” she said.

Morgan said she wants to push back on the idea that a mere return to pre-pandemic levels of hunger — when about 800,000 people relied on food banks — is sufficient progress.

“I say, ‘No, it was never OK,’” she said. “It is fundamentally not OK for us to set up a society in which one in five of us cannot get our basic needs met and have to make impossible choices between rent and food, or medicine and food. And I hoped that going through a shared experience, like the pandemic would help us build a movement of folks who see that, too.”

InvestigateWest (invw.org) is an independent news nonprofit dedicated to investigative journalism in the Pacific Northwest. Visit invw.org/newsletters to sign up for weekly updates. 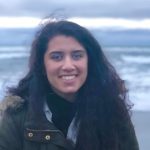 Kaylee Tornay has been documenting stories in Oregon and California since her high school journalism days in Bend, Oregon, covering the progress of the water polo team. A graduate of the University of Oregon, she braved the rains of Eugene with her notebook before moving on to cover wildfire mitigation and dangerous highways in the forests and vineyards of Southern Oregon and Sonoma County. She has won regional awards for her work watchdogging public and private schools’ efficacy in meeting student needs, from safety to mental health support to instruction. Reach her at [email protected]