The rules adopted by the Public Utility Commission apply to Pacific Power, Portland General Electric and Idaho Power.
By Lynne Terry - Oregon Capital Chronicle
May 24, 2022 at 7:00am

Oregon’s Public Utility Commission has adopted a permanent plan for public notification of planned electric shutdowns in the event of a wildfire or weather event.

The plan largely mirrors temporary rules adopted last May that told Pacific Power, Portland General Electric and Idaho Power to ensure that those affected by a planned power shutdown are informed. According to the rules, these utilities need to notify emergency managers, government agencies, local officials and the public in advance, if possible, of a power outage and then provide daily updates.

“Sometimes things happen really quickly,” said Kandi Young, spokeswoman for the utility commission. “In some cases, they can plan ahead.”

The rules tell the public, government agencies, fire officials and others about plans to de-energize lines so that they can prepare and will know what to expect. They only cover the three investor-owned utilities in Oregon which serve 1.5 million Oregonians, only about one-third of the population. The rest of the state is served by 38 consumer-owned electric utilities that are overseen by local boards or municipalities.

The rules do not determine when a shutoff should be instituted.

“That responsibility lies with the utility,” Young said. “They know their system. They know where vegetation is a challenge. They know their transmission lines and where there is a potential for risk better than anybody.”

De-energizing lines is only used as a last resort because it can affect hospitals, police and fire officials, water services and people who require electricity for health devices, Young said.

“It’s something that has always been there as an option but hasn’t really been used in the West until more recent years,” Young said. 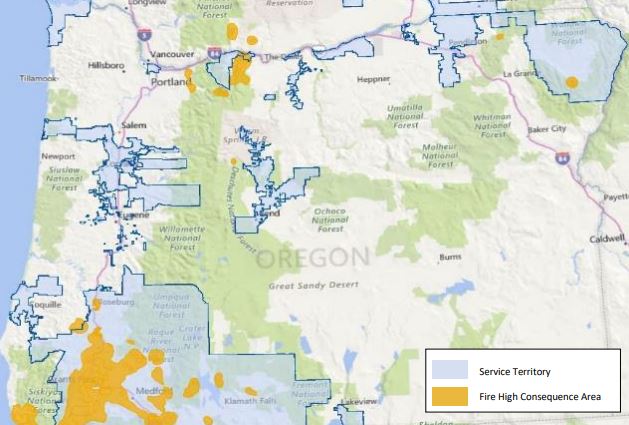 Pacific Power and PacifiCorp, its owner, face several lawsuits in Oregon over wildfire damage. The latest appears to have been filed Friday in Multnomah County Circuit Court. The complaint was not yet available on the court’s public information website. A suit filed in April, also in Multnomah County, on behalf of 21 people, accuses the companies of responsibility for the Echo Mountain Complex fire in Lincoln County in 2020, which burned 2,500 acres, killed pets and damaged more than 300 structures and property, the suit said. It said executives knew hot, dry conditions with strong winds could spark a wildfire, noting that other utilities chose to de-energize lines. The suit seeks up to $5 million in damages for each plaintiff.

Another lawsuit filed in March in Multnomah County Circuit Court seeks more than $10 million in damages from the Slater Fire, which spread from northern California into Jackson and Josephine counties in September 2020. The suit, on behalf of nearly 30 people and a few companies, accuses the companies of negligence in not shutting off its power lines in dangerous weather conditions. Other companies de-energized lines, the suit said. That suit has moved to U.S. District Court in Portland.

The companies also face lawsuits in California where prosecutors reached an agreement with Pacific Gas & Electric last month for more than $55 million over two wildfires caused by its power lines, according to news reports.

Drew Hanson, a company spokesman, said PacifiCorp does not comment on pending litigation. He said the company has only de-energized lines twice – in Weed, California, at the base of Mount Shasta in 2020 and in Dunsmuir in the Trinity Mountains in northern California in 2021. The shutoffs lasted less than nine hours.

Companies can only de-energize lines in designated high-risk areas in anticipation of a potentially catastrophic wildfire, Hanson said. He said the company looked at 10 years of data on past fires, wind patterns, fuel sources, topography and other factors to determine the high-risk areas. “The identification of those areas helps the company prioritize where the over $300 million in system hardening and wildfire mitigation work is being done now and over the coming years,” Hanson said.

In April, the commission approved the wildfire mitigation plans for Pacific Power and Portland General Electric. Approval of the plan for Idaho Power, which serves 20,000 customers in eastern Oregon, hinges on the company providing additional details about risk areas, their cost/risk mitigation assumptions and analysis and costs. 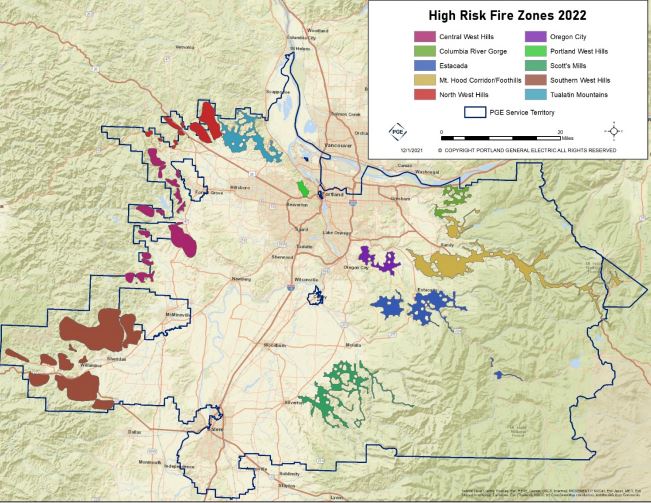 The plans, which were filed in December, mark the first time that the companies have filed such reports in Oregon. But PacifiCorp has filed similar reports in California since 2018, Hanson said.

“We have a history of planning for and mitigating against the threat of wildfire risk,” Hanson said.

He said the company considers factors like past wildfires, topography,

The 10 areas include Mount Hood, the Columbia River, Estacada, Oregon City and other areas around Portland.

The company has had a mitigation strategy since 2020, Platt said.

The company has only had one public safety power shutoff – in 2020 near Mount Hood that affected 5,000 customers. That decision coincided with the Labor Day fires sweeping the region.

Idaho Power has never had a public safety power shutdown in Oregon, and has no designated high-risk areas, said Sven Berg, a company spokesman.

Learn how we do our work at Salem Reporter - read our principles.

Advertisement
We are here to take you from start to finish.
mtengineering.net

Advertisement
Dozens of programs can be completed in under a year!
chemeketa.edu

We are your reader-supported local news source. We survive in this era because subscribers are backing us.

You can be a backer too, and keep alive a powerful community asset — strong, independent and accurate news. Support us today and join the movement that says the loss of local news is an unacceptable loss.

Subscribe now
More from Salem Reporter
FreeSTATE LEGISLATURE Jul. 1
Former Keizer city councilor Rich Walsh is new Democratic nominee in competitive Oregon Senate race
Walsh replaces Woodburn Mayor Eric Swenson, who dropped out after winning the nomination.
STATE GOVERNMENT Jul. 1
Oregon’s new Treasury office is ready for the next disaster
Sitting on 28 base isolators and designed to withstand a 9.0 earthquake, a new south Salem building is intended to make sure Oregon’s government can still pay employees, distribute disaster funding and get benefit payments to residents no matter what’s happening outside.
SALEM LAW ENFORCEMENT Jul. 1
Salem drivers with broken car equipment will now get a coupon, not a citation, from police
The program, which begins this week, came out of conversations between police Chief Trevor Womack and Reginald Richardson, president of the Salem-Keizer NAACP, about ways to improve traffic safety and focus policing on more serious problems.
HEALTH CARE IN OREGON Jul. 1
State fails to enact majority of recommendations aimed to stem opioid misuse, audit says
A Secretary of State report says the state needs to do more to identify excessive prescribers and patients who “doctor shop.”
SALEM EVENTS Jun. 30
Marion County Fair 100% back for 2022
After a scaled-back version last year, the Marion County Fair returns July 8-10 with pre-Covid regulations, acts and attractions.
Return to homepage